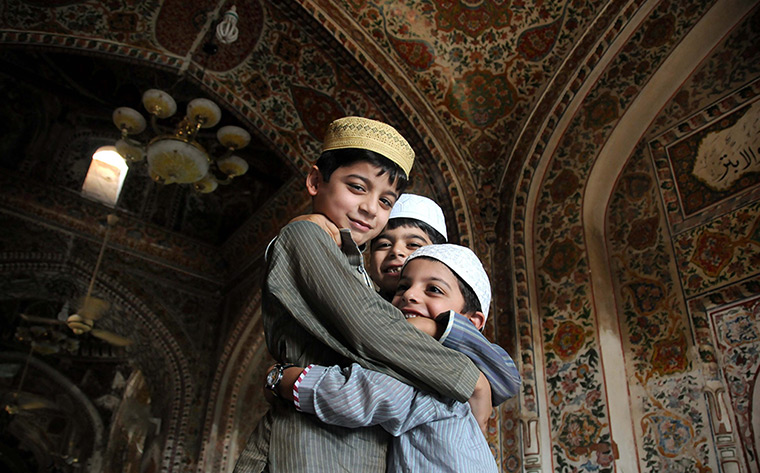 Eid al-Fitr  "Festival of breaking of the fast"also called Feast of Breaking the Fast, the Sugar Feast, Bayram (Bajram), the Sweet Festival[3] and the Lesser Eid, is an important religious holiday celebrated by Muslims worldwide that marks the end of Ramadan, the Islamic holy month of fasting (sawm). The religious Eid is a single day and Muslims are not permitted to fast that day. The holiday celebrates the conclusion of the 29 or 30 days of dawn-to-sunset fasting during the entire month of Ramadan. The day of Eid, therefore, falls on the first day of the month of Shawwal. This is a day when Muslims around the world show a common goal of unity. The date for the start of any lunar Hijri month varies based on the observation of new moon by local religious authorities, so the exact day of celebration varies by locality. However in most countries, it is generally celebrated on the same day as Saudi Arabia.[2]

Eid al-Fitr has a particular Salat (Islamic prayer) consisting of two Rakats (units) and generally offered in an open field or large hall.[4] It may only be performed in congregation (Jama’at) and, has an additional extra six Takbirs (raising of the hands to the ears while saying "Allahu Akbar", literally "God is greatest")

Muslims believe that they are commanded by God, as mentioned in the Quran, to continue their fast until the last day of Ramadan[6] and pay the Zakat and fitra before offering the Eid prayers.